On her 25th attempt at the top level, Great Britain’s Piggy (Georgina) French has won a five-star event, taking out the 2019 Mitsubishi Motors Badminton Horse Trials on her 14-year-old mare, Vanir Kamira.

Piggy’s show jumping round was one of just 11 clears inside the time allowed, which proved influential and provided a true nail-biting finish.

Oliver Townend and Ballaghmor Class had a rail in hand over Piggy, and could also afford to be three seconds over. Though he and the talented grey looked to both be jumping well, a late rail fell and then – almost unbelievably – he was a single second too slow, handing the victory to Piggy by 0.3pen.

“I’m very much not used to this – I can’t believe it,” says an emotional Piggy. “I woke up this morning thinking we could do it, then after I walked the course I thought that was it, as that style of course really doesn’t suit her, with several related distances. I could build the same course at home, in the same size arena and jump it 50 times and we wouldn’t jump clear. In the nicest possible way, she’s a pain 362 days of the year, but I love her to bits and she comes into form at these big ones.”

Vanir Kamira is listed on her FEI profile as an Irish Sporthorse, but she is by the Dutch-bred stallion Camiro De Haar Z and out of a full thoroughbred mare, Fair Caledonian.

Australia’s Chris Burton was third, one penalty behind Oliver, riding the 11-year-old Cooley Lands; the pair were the only combination to finish Badminton 2019 on their dressage score of 28.1. Burto was also fourth on Graf Liberty, on 33.7.

After having three in the top 10 going into show jumping, New Zealand hopes tumbled along with the rails. Andrew Nicholson had two down with Swallow Springs, but it didn’t effect his place too much – he dropped from fourth overnight to fifth, on a score of 35.8.

“He went a bit green to start with and showed his inexperience,” says Andrew of his 11-year-old. “He didn’t want to go near the crowds but he jumped better during the second half of the course.”

Tim Price had three rails down with his 2018 Burghley winner Ringwood Sky Boy, to drop from overnight sixth to 10th place, but he was still delighted with ‘Oz’. “I’m actually super-pleased – a composed dressage, one of the best cross-country rounds I’ve ever had on him and a slightly disappointing three down… but show jumping is a learnt skill for him, not a given. Besides, we’re saving our clear for Burghley!”

Ginny Thompson had a gut-wrenching round, with Star Nouveau lowering eight rails and incurring 2.4 time faults, adding 34.4 penalties and tumbling from eighth place to 39th. As she says, not the round she was hoping for, but nothing can take away from that amazing cross-country performance the day before. “Clear and inside the time in style at Badminton is a day I will never forget,” says Ginny.

Jesse Campbell managed a top-20 finish, which is a pleasing result for him and Cleveland in their first five-star completion; the pair had three rails down to wind up on 55 penalties in 19th place.

Meanwhile, Oliver Townend was sixth with a single rail down on Cillnabradden Evo, and fellow Brits Tina Cook (Billy The Red) and Imogen Murray (Ivar Gooden) rose three and four places respectively into seventh and eighth thanks to clear rounds inside the time. Imogen also won the prize for the biggest climb after the dressage, having started off in 65th.

William Fox-Pitt’s comeback at the top level (after that devastating head injury three years ago) was another of the great stories of this year’s Badminton. He was ninth with Little Fire, and 13th with Oratorio. 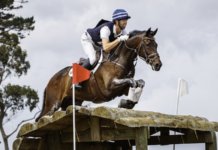 A tough day at Taupo