“Making it in eventing has been seriously difficult and the hardest part is when things go wrong, because you have no support network. It’s just you,” says Jesse Campbell as he sits in the tackroom at Maizey Manor Farm in Wiltshire, almost 12,000 miles from home in the Waikato.

Jesse, 6ft 6in tall and one of the loftiest event riders on the planet, has just returned from Luhmühlen  in Germany, where he finished 16th at his first four-star in hot company aboard his leading light, Kaapachino. Two phases went almost perfectly, and after scoring 36.8pen (75.5%) in the dressage, Jesse was overcome with emotion.

“I saw three 9s go up for the last halt and thought that it may be a sympathy mark, but Erik [Duvander] told me to stay there and watch my score. When it flashed up I burst into tears. It’s been such a hard road and Kaapy isn’t very talented on the flat.”

A clear cross-country round bang on the optimum time was followed by a disappointing four rolled rails in the jumping for a final 16th place; a clear round would have seen him fifth.

However, just competing at four-star level is little short of a miracle for man and horse, as both suffered a series of setbacks on their journey to the top. Kaapachino required a year off for a tendon injury in 2013. Then, as he was being honed for last year’s Badminton, he developed a bacterial infection which meant missing the premier spring four-star.

“With hindsight it was a good thing. Going to Luhmühlen gave us a little more time to prepare,” says Jesse as he checks his continually buzzing phone for the latest in a long line of text messages.

But Jesse’s own dark problems make Kaapachino’s look pale by comparison. He lost his confidence while based at Andrew Nicholson’s yard.

“I had always wanted to be the best, but I didn’t think that I could do it any more,” explains Jesse. “It took until the middle of 2014 to get my confidence back. I had good people around me, including Erik, who stepped back in to train me, plus, of course, my girlfriend Goose [Leigh].”

There are also his parents — father Craig is a GP and mother Ezra is a former art teacher and potter — who have assisted financially, physically and psychologically. Eventing, he admits, has not only taken over his own life, but also his mother’s. She transported her statuesque son to every show hunter, pony club and eventing competition he ever contested from the age of 11 onwards.

“I’ve always had a passion for horses. I’ve no idea where it came from, as no-one else is horsey in my family. When I was a kid and we visited Mum’s friend I got out of my stroller and they found me in the paddock under one of the horses.”

Jesse grew up in Cambridge, in the centre of the horsey mecca of the Waikato, which was also home to Mark Todd, Andrew Nicholson and Vaughn Jefferis, his inspirations.

That ambition continued all the way through his years at St Peter’s, Cambridge, a private school which awarded him a General Excellence Scholarship, and it stayed with him as he studied at the University of Waikato, until he dropped out of his sports science and marketing course to (of course) follow his dream.

“I’m more practical than academic. If I had my time again I would have chosen a more practical course. My girlfriend, though, is always on at me to get another skill.”

The year that changed Jesse’s life was 2009. He spent a few months in the UK training with Mark Todd and on days off watched Andrew Nicholson ride. He returned to New Zealand to build up a team of horses, safe in the knowledge that a flight back to the UK was as certain as night following day. Apart from the eventing scene, he liked “how England is a happening place. I don’t think I’ll ever move back to New Zealand, although I may retire there”.

In 2010 an email pinged into his inbox. It was from Andrew Nicholson offering him a job.

“Caroline Powell once told me that you should never let an opportunity pass you by, and this was a pretty amazing one. In a month or two I had packed up. I knew that I wouldn’t be asked twice.”

He stayed at Andrew’s Marlborough yard for nearly two years, gaining some initially impressive results, such as winning the Tattersalls CCI2* with Kaapachino. But soon the red rosettes all but dried up.

“I learned a lot of life’s lessons while I was with Andrew. If I could stick at it then, I knew that I really wanted to be an event rider,” says Jesse.

When he packed up and headed for Maizey Manor, he didn’t even own a dandy brush. He rented just three boxes for his three horses. What a difference three years makes. Today, as he lives on site in a flat, all of the boxes in one barn are filled with Jesse’s horses.

Another change has seen him take a slight raincheck on buying thoroughbreds.

“It’s hard to find a really good one. I had a good four-year-old arrive the other day and I enjoy riding them, but it’s really hard to find the ones that will jump clear on the last day,” says Jesse, who kick-started his career with TBs fresh from the racetrack. These included Volitation, whose extraordinary jump prompted Ezra to give him a name that meant ‘the ability to fly’.

Tragically, Volitation was killed contesting the New Zealand Young Rider Championships over a new course at Pukemarama, when the newly constructed bank gave way under his hooves. It was the first in a long line of setbacks for the now 25-year-old Jesse.

“I thought I would have nailed it a lot sooner,” he says, referring to the interminable road to the sport’s pinnacle. “But I believe that I’m good enough. I’m not good enough to do anything else, which is why I have to keep going,” he adds. Clearly his mojo has returned.

6 things you didn’t know about Jesse

1. He once dyed his hair to match Kaapachino’s tail, thinking it would earn him better marks in the dressage. It was an unmitigated disaster.

2. He bought a black French Bulldog called Berry for his girlfriend, Goose, but he liked the dog so much that he kept it for himself.

3. He loves visiting London art galleries, and is a big fan of modern art, primarily the American artist Mark Rothko and Russian Wassily Kandinsky, but also likes Turner’s seascapes and Alfred Munnings’s equestrian masterpieces. Other hobbies include golf (with Tim Price) and reading.

4. He dressed up as Napoleon Dynamite, from the movie of the same name, for James Todd’s 21st.

5. He follows a lot of Victoria’s Secret models on Instagram.

6. As a teenager, he turned down a professional rugby contract to play in France, so that he could concentrate on riding.

Paxton Conder: Against the odds 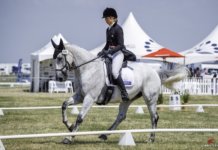